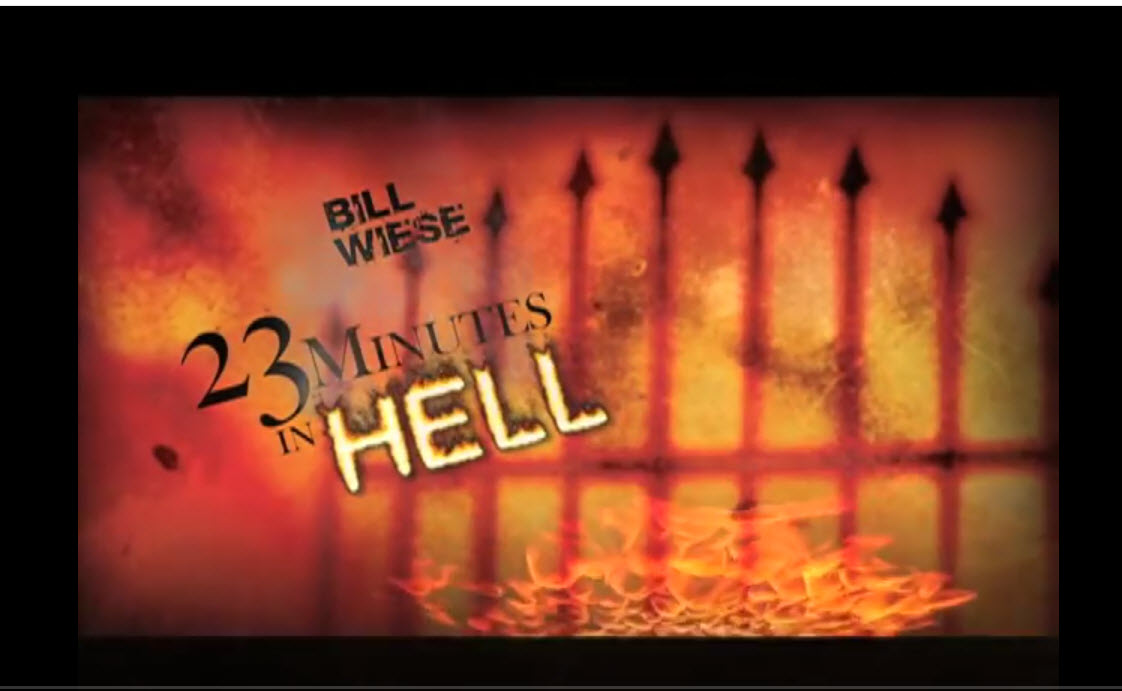 While there are many ideas about what Hell might be like, Bill Wiese has actually been there. He has written a book about his experience entitled “ 23 Minutes In Hell ”. In the following paragraphs, I have condensed and summarized his description from Sid’s March 27, 2006 Messianic Vision interview with him: “On a night in late November of 1998, I went to bed at my usual time, but I could not get to sleep. At 3 AM, I was still completely alert. Suddenly, I began to have a strong sensation of falling down through the floor. As I fell, I started to feel very hot so hot that I wondered why it did not kill me. When the falling sensation finally stopped, I found myself burning hot, and in total darkness. Somehow, I knew I was in Hell.

“For just a moment a light flickered and revealed that I was in a prison cell with stone walls and bars on the door. In the cell with me were foul smelling, disgusting creatures. They were 11 or 12 feet tall, with bumps and scales and grotesque distortions. They were communicating among themselves, blaspheming God continually with a terrible hatred. “These creatures also had hatred toward me, and wanted me to suffer. One of them picked me up and dug his claws into my chest repeatedly until my flesh was torn and shredded into ribbons. The pain was indescribable. Then somehow, my flesh would all go back together, and he would do it again and again. I had no strength to fight them off, but even if I did, their strength was a thousand times that of a man. I was helpless against whatever they wanted to do to me. “Even though I was once attacked by a shark, I had never felt pain and terror like this. I knew this was not a dream. All my senses were working properly, and I could think and reason. I knew for certain that I was in Hell, but strangely I had no thought whatsoever of Jesus, even though I had been a Christian most of my life.

“My consciousness was continually penetrated by the agonized screams of multitudes of other people. And although I was aware of people screaming all around me, there was no communication, or contact, or any human comfort whatsoever.

“The heat was unbearable. There was no water, and I was so thirsty, but you don’t get one drop of water. It is a struggle to breathe, and what air I did breathe seemed toxic, with a foul, putrid quality that smelled of sewage and death and burned flesh. You need sleep there also, but you never get to sleep either. There is no peace or comfort or rest of any kind from the torment. And you know that it will never end.

“After a while the demons let me crawl away from them, and I was able to see people in another area burning in flames in a pit. I could see their arms flailing and hear their screams, but nothing would ever get them out. That is the worst the hopelessness of knowing that it will never end, and that nothing will ever get you out. I experienced many other terrible things described in my book.

“After a while, Jesus appeared and took me into His arms. In His presence I felt such a deep, tender love and I knew I was safe. The terrible demons suddenly appeared weak and small as ants in the presence of the Lord. Jesus said, “All you have to do is cast them out in my name.” Demons have to bow their knee to His name.

“Hell was not created for people, but for the devil and his angels. The Lord loves us more than any human love we could ever experience, and the pain of what He suffers when one of His children ends up in Hell is indescribable. He was crucified on this earth to save us from this torment, but it is not automatic. Being a good person is not enough. You must receive Jesus; there is no alternative.

“As Jesus held me in His arms, we left Hell and ascended until I was above my house, and I could see my body lying in my house. Jesus told me that He had given me this experience so that I could warn people how real and how terrible Hell is. So many have lost the understanding of what it is that people need to be saved from. Believers must understand how urgent it is to warn people about this eternal suffering. The time is growing short – very, very short.

“After a while, I was sent back into my body. The instant I hit my body, the terror and pain of what I had experienced hit me full force. I began to scream uncontrollably, and I knew that if something did not reduce the horror of my memories then I would die. My wife heard me screaming and rushed to me. I begged her to pray for me, and after a long while of her praying, I began to feel calmer.”

It was weeks before Bill could talk about the experience with others. And, as he expected, he was met with some skepticism. However, from my perspective as a psychologist, Bill’s experience was real, and not imaginary or a dream. Bill’s wife Annette added this: “Bill and I have been conservative Christians, active in church for most of our lives. We do not drink or use drugs, and have never before had any unusual experiences. Bill is a steady-as-he-goes, consistent, unemotional guy. There is no doubt in my mind that what he experienced was real.”

And here is what Sid said about him: “I have checked this guy out with people who know him well, and he has credibility. I believe that the Lord has given him this experience as a warning to all those who would dismiss Hell as symbolic place. It is a very real place, and I urge everyone to become passionate to save those who will end up there if they do not meet Jesus. Get Bill’s book: it will change your destiny.”

You can listen to the entire interview by going to the Messianic Vision radio download for the week of March 27, 2006.

In concluding, Bill said that he expected many would be skeptical about this experience. However, he has a mission to tell everyone that he can about it, and wrote this book, “23 Minutes in Hell”, because he feels an urgency that there is very little time left. Jesus told him two times: ‘Tell them I am coming very, very soon!’